Pancetta and Guanciale: do you get them mixed up?

There is often some confusion between pancetta (bacon) and guanciale (pig’s cheek) especially when it comes to using them for the preparation of typical dishes such as carbonara or amatriciana.

But why not get to know them a little? They have one thing in common, both are made from pork, subsequently processed with salt and pepper. But it ends here!

The cuts of meat  they derive from are very different: pancetta, in fact, is one of the Italian cured meats consisting of a single whole anatomical piece of the pig and is obtained from the ventral part of the animal, while the cut of meat for guanciale comes from the pig’s cheek, or the throat and the neck, and is a type of fine fat.

Processing of pancetta is quite standard, and involves various treatments including trimming, derinding and defatting. Once prepared, the piece of pork is subjected to salting, sprinkling the surface of the cured meat with salt, black pepper, and various spices depending on the region where it is produced, then stitched up and matured.

The maturing period of pancetta varies; it can even exceed 6 months, depending on the size and traditional processing of the area. This means different flavours and tastes.

Guanciale is processed together with the rind, salted and peppered externally, enriched with various spices that during maturing, for no less than two months, give it its characteristic flavour.

Pancetta is a well-known and widespread cured meat in Italy, produced in various areas of the peninsula. Whereas guanciale, definitely harder to find, is more expensive, but also more highly prized than pancetta.

It goes without saying that as far as both type of meat and processing are concerned, pancetta and guanciale have different characteristics, as well as in terms of nutrition and taste and therefore their use in cooking is different. Guanciale has much more depth of flavour and a harder texture and the two traditional recipes “spaghetti alla carbonara” and “pasta all’amatriciana” strictly require it. 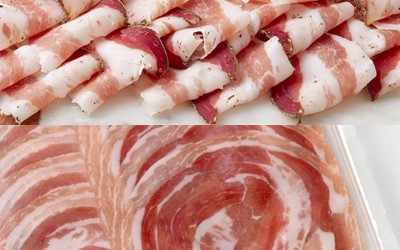 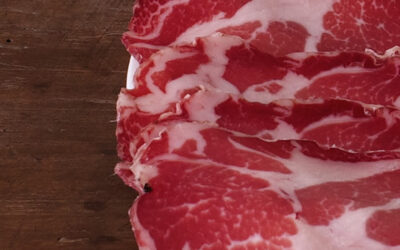 COPPA PIACENTINA DOP: did you know that…

The sweet fragrance of Pancetta from Piacenza is the result of a long-standing and refined art, whose origins go a long way back in time. The inhabitants of the Po Valley must have already been familiar with pigs during the Bronze Age, going by the archaeological...